I decided to work a little bit on my YouTube channel called Fiondo. I will be focusing mainly on games and tech. but maybe also some other things.

I also started my Patreon website because why not? 🙂 Currently I have there mainly videos from VR game Beat Sabre. I am planing to do some green screen experiment to create a mixed reality.

I must not forget about Night Star Alliance which is great Shoot em up in VR!.

The future will be as I said above playing with green screen or actual footage of me playing and also some story videos from Elite Dangerous or some guides and streams.

as title says I will be reviewing my new keyboard. Till mid of October 2017 I was happily using the Corsair Raptor K50 keyboard. Needless to say Corsair knows how to build good keyboards which are sturdy and quite ergonomic. On the other hand Razer is mediocre at best.

I told my self to never buy anything from Razer ever again. will see if I will manage.

Why is Razer Chroma so bad? Mainly the materials are all plastic, Razer software is hideous and buggy. I hate using that. I would sell the keyboard but I would not be able to sell is for good price.

At beginning the keyboard was fine and I was mainly amazed by the lighting effects (this Razer can do) and the wrist rest is also pretty nice, but again the software is so bad the agony is so high…..

I am just hoping that Chroma will get broken so I can to RMA it and get something decent. Probably again some Corsair keyboard.

Sorry Razer but I will not buy you ever again!.

it was long time since last post….well long time I tend to write that in my previous posts but it is true. Back to Fiesta, I guess most of you know this nice little car. It belongs to super mini class of cars, mostly due to trunk space.

Why Diesel or no diesel you ask? Well it’s depends. If you have Fiesta mark VI. made before year 2010 you have probably TDCi diesel 16-valve engine. Those powerhouses tend to have degenerative oil problem and also that this engine is little bit too much complex. In year 2010 Ford introduced new engine TDCi diesel 8-valve engine (luckily that one I have in my car), which is more reliant and construction is more simplistic. Engine in my car is 70kw, 95hp. Max speed is 178km/h…I must say that is quite easy to achieve this speed and its pity that then speed is reduced by speed limiter.

Honestly I am not sure what I wanted to say by this post….ecology of my car is quite good. Current econorm is Euro 6 and my car is Euro 5. So when you are driving behind me no black smoke to your window :-). 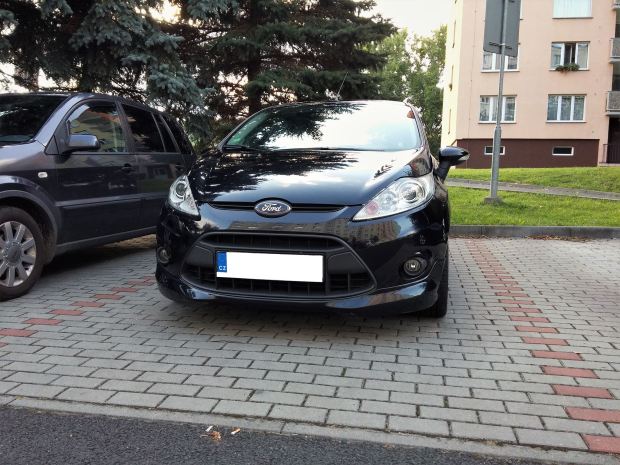 See you next time.

are you yoga fan? If the answer is yes then I have good news for you! My lovely wife is yoga teacher. She is focusing on the therapeutic yoga. She studied yoga with the best teachers in Czech Republic like Lenka Oravcová and Lucie Koenigova. But more about Jana is on her own website https://janaondojoga.webnode.cz/ currently its only in czech language but she will add soon also translated version.

this is second part of The Story of Great Friendship. The first part is on the link below.

50 years ago. The main hall was busy, all devoted themselves to tasks like ants in the anthill. At the top back of the hall was control room where Jones was reading technical report. All system are working and productivity went up more than 50%. “With this rate we will be able to test Setsuna soon.” Jones thought.

“How is it going?” Tom asked. “It’s going quite well. We are ahead of plan.” Jones answered. “According to news war is not going as it should. I really hope that we launch Setsuna soon”.

David start to remove soil under his foot and after a while he found metal object. “What is it?” David asked himself. It looked like some kind of hatch. There was text on them saying, “Lambda R&D Laboratory”.

David tried to open the hatch, but he didn’t know how. The boy was the only standing above it and was thinking what lays below. After few minutes David noticed of three mark where middle of hatch was. He touch them and felt tension but nothing happen.

Then suddenly hatch opened. David was shooked with his body and he carefully looked inside.

Thank you and see you next time.

it has been a while since my last song of the week. Maybe it was mainly because I didn’t find song good enough. But, I had the right song right in my headphones all the time :-).

As you can see on featured image is Leonard Cohen. I can proudly say that I firstly heard songs from him as child still in my moms belly :-D. She used to play album, I’m your man on gramophone. Luckily we still have that record and also gramophone and I can play it.

I recently read great book written by mr. Cohen, the Favorite Game. It’s 10/10 book a novel which will make you think about your life.

Thank you and see you next time.

I have for you author’s story written by St. John Smith. The Story of Great Friendship between boy and machine. Where it will lead? What will be the conclusion of this  intriguing path?

I am glad that John wrote this story in English so I don’t need to translate it or like last time publish it in Czech. On the other hand sorry Czech readers :-). And now the story.

The Story of Great Friendship

“So you are the new guy who moved to our city?” Trevor said. David look at Trevor and said “yeah, I am. Is there any problem?”. Trevor just called his gang and without saying anything he punched David in to face.

Trevor took a deep breath and shout at David, “From now on your life will be hell.” David was slowly getting up and then suddenly with great burst he punched Trevor right in to his chin. Trevor didn’t expect that and from that shock he didn’t notice that David slipped away.

Act 2 – What lies in the woods

In the forest behind the school, David starts to slowing down. “Those bastards, I will show them one day.”, David thought. He was walking and the scenery was mostly the same tall pines everywhere and sometimes beam of sunlight.

David was walking around 2 hours when the sound of his footsteps changed. From faint rustle in to the metal rumble. David thought that maybe some old junk is lying below his foot. But he was wrong.

ok next acts will be there soon…maybe 🙂